A dancemaker, she has been active on the contemporary dance scene since the early 1990s. She was one of the founders of the Kinkaleri dance company and with them she created many choreographies, presented them internationally and received many awards. Since 2008 she has begun developing her own choreographies and directing her focus on theoretical reflections of strong dynamic impact. She is currently one of the main choreographers in Italy and is invited to the main festivals of the new contemporary dance scene. She works intensely on productions and at the same time gives lectures, runs workshops and outlines experimental proposals. As a resident choreographer she has worked for the major opera theatres, and Italian and foreign institutions, such as the Teatro Comunale Firenze – Maggio Musicale Fiorentino, Ater Balletto, Balletto di Toscana, LAC Lugano, MACRO Roma, MUSEION Bolzano and Museo Pecci Prato. 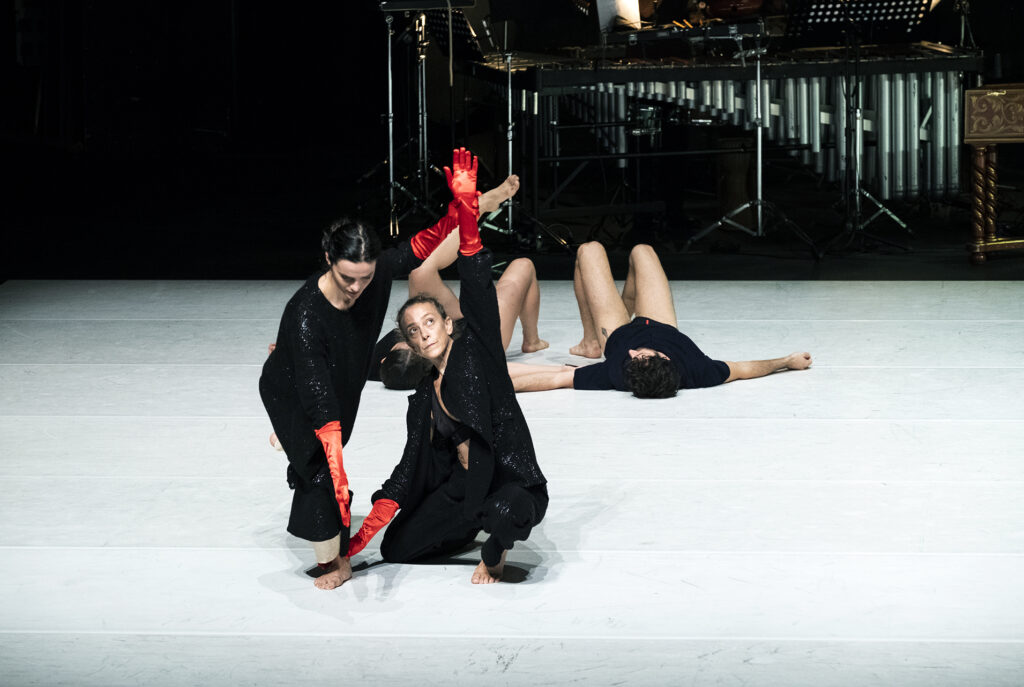 created in the framework of Mi-To Settembre Musica

Touching means existing. It has to do with the life of shapes and their possibility to find a measure, to let bodies plainly rest in space. The choreographic concept behind TOCCARE the White Dance is implementing an aesthetical experience which unveils the power of touching as a founding gesture of both the world of tangible bodies and intangible matter, and the true intimacy of a radically open sensory perception. The primacy of touching is part of a thought system whose main feature is being singular/plural while acknowledging that we are open to the other equally from the inside and the outside. Touching the other means touching all the possible others, including oneself, including what is intangible in the tangible. It also means radically rethinking the nature of being and time. Touching then is like approaching the world of an individual which is endless exposition. It means being here, side by side, and creating bodies’ compositions without thinking of getting back to oneself. It is exciting the extension and extending the emotion in a simultaneous encounter which coincides with existence itself.

So, bodies touch each other and by doing so they become flesh. Yet, it is a detached touch, it is the gesture of touching without dominance, as if it was enchanted by an expressive power which embodies all the gazes of an ecstatic intermission in itself.

Not exercising all the power we have means performing a lift without possessing it. To neutralize the tyranny of a body, which is being colonized by an endless search for profit, means practicing a way of moving which is per sé contagiously and cheerfully alive. Reactivating an erotic body that has been dismissed by a hyper-sexualized narcissism, which builds isolating architectures, is a political issue. Also, above all, it is a responsibility without calculation we share with all human and non-human beings. It is an aesthetical dimension which puts us in contact with the full nothingness at the core of the matter and the sensual qualities of a world, which is not a World any more, for an ecology without return.

The creation develops in parallel with the re-writing of the Les Pièces de clavecin by Jean-Philippe Rameau by the composer Ruggero Laganà. It is an abstract and concrete musical dimension, which has been transfigured as opposed to the initial context but it is characterized by the inherent qualities of the 1700s model. The 1722 Traité de l’harmonie réduite à ses principe naturels by Rameau anticipates a new understanding of music as an expressive language not only of individual emotions and feelings but also of the divine and rational unity of the world.

The piece has been conceived for 4 plus 1 dancing bodies which engage in an endless dance, a tactile composition where bodies let themselves go fully. It is a ‘chamber’ type dance piece which bares the almost technological, analytical precision and kinematic counterpoint. The number four is the expression of what is concrete, unchangeable and long-lasting and it is symbolised by the square, which perfectly embodies all its characteristics. It is the number of the matter, motion and infinite; it represents at the same time the bodily, the corporeal and incorporeal.

The White Dance, the second part of the title, hints at the famous The White Album

the Beatles composed in 1968 after their return from India and their experience of transcendental meditation. It is one of the most varied and purely experimental albums. The title also evokes the term Ballet Blanc, used to define a special section of a ballet mainly featuring diaphanous and immaterial creatures wearing characteristic white costumes.